Our solicitors are highly experienced in dealing with the full spectrum of legal issues involved with Management Buy Outs and Buy Ins.

Book your consultation using the below enquiry form. Alternatively, you can call us on 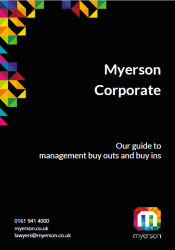 Do Nothing at Your Peril, Trustees! - Previous Marriages and Life Interest Trusts