Thinking of contesting a will? If so, it’s best to act now. Our specialist team are ranked top tier in the Legal 500. Contact our dedicated team today. 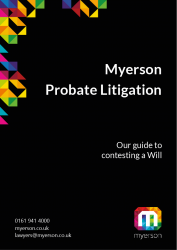 How to Contest a Will

There are two common ways for contesting a Will. Our team’s experience and specialism mean we can provide clear advice as to your position and the likely outcome of your claim. We recommend that you act quickly, as some claims are subject to short time limits.

The first is to contest the validity of the Will itself. If that claim succeeds, then the deceased person’s estate will pass either in accordance with a previous Will or in accordance with the rules of intestacy. If you would like to understand how the intestacy rules affect your situation, you might find the intestacy calculator here helpful. The second way is to bring a claim under the Inheritance (Provision for Family and Dependants) Act 1975.

Contesting a Will FAQs

Some common questions – please contact us to discuss your circumstances.

Our Contesting a Will Solicitors

Revocation of a Will

Higgins V Morgan and Others: Claim Against Stepfather’s Estate

View all our latest news